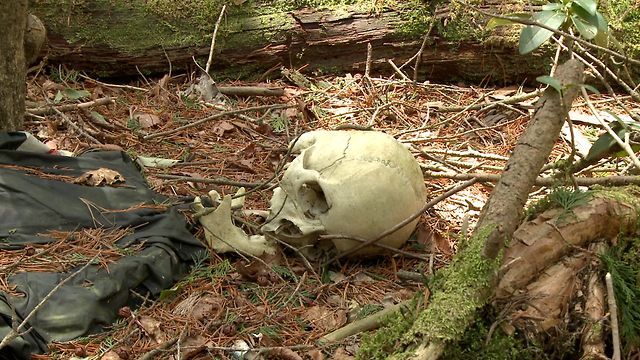 If horror movies scare you to death, you should never plan a visit to the Aokigahara forest in Japan. This infamous forest at the base of Mount Fuji in Japan has earned the reputation of being the ‘suicide forest’, thanks to the dozens of suicides that get committed inside the forest every year. As the place has been the suicide ground for hundreds of people, a common belief is that it must be utterly haunted.

Whether ghosts are really wandering among the woods of Aokigahara Forest is not certain, but there are many creepy stories which do point out that the legendary forest may be haunted. Here are top 10 Aokigahara forest stories which will run the chill down your spine. 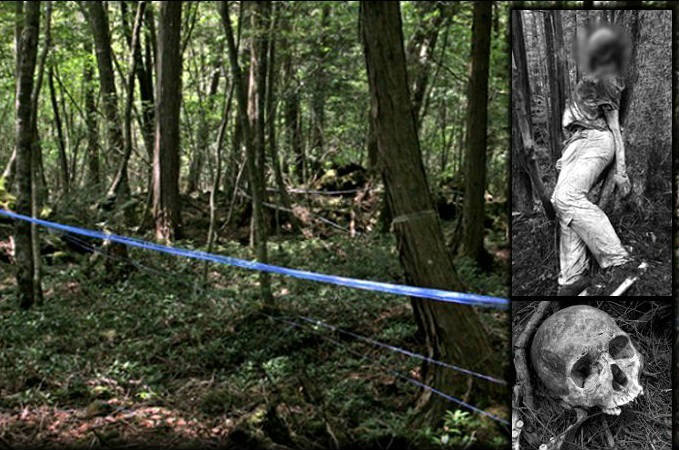 (1) Not all people who go to Aokigahara forest go there with the intention to end their lives. Those who intend to come back, string along tapes behind them which would act a pathfinder on their way back. One woman had reported that the tape was mysteriously cut and she almost lost her way inside the eerie forest. As there was no one in the vicinity who could have cut the tape, people thought it to be the task of yurei, the Japanese term for spirits. 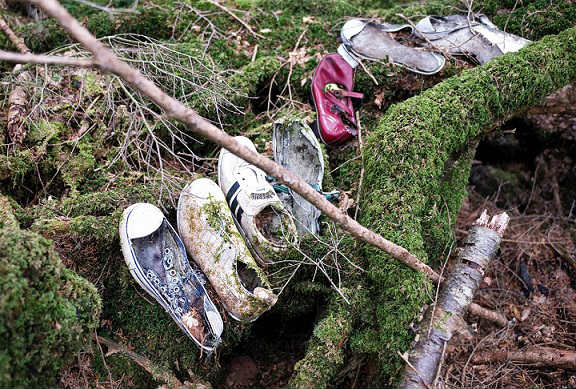 (2) Rob Gilhooly, a writer for the largest Japanese newspaper Japan Times had once heard a petrifying scream while he was wandering in the forest. Upon investigation, he discovered the deceased body of a man who was dead long back. The writer still wonders if it was the spirit of the dead man who caused the scream. 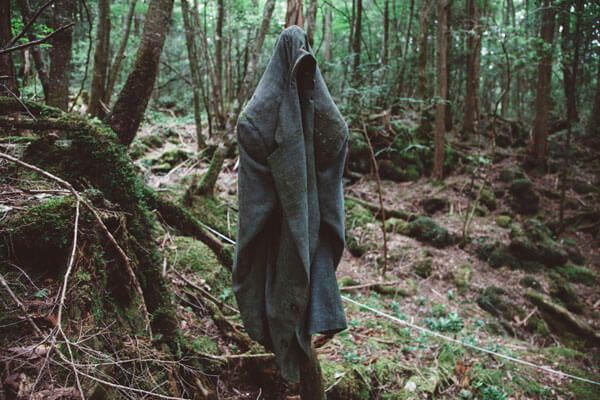 (3) A team of investigators from Syfy paranormal investigation show Destination Truth had captured a white smoke like object appear and then vanish in thin air. The video of the same was tested for authenticity and was found not be tampered anywhere. The sight of the apparition was not the first event of this kind. 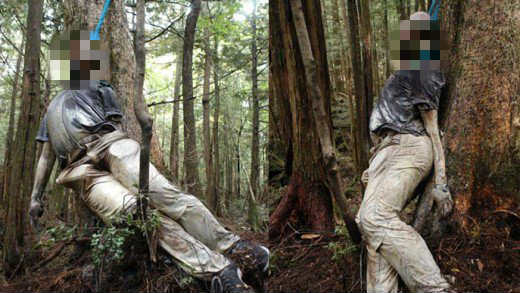 (4) Kyomyo Fukui, a Buddhist monk who had once gone to the Aokigahara Forest to set up an altar (the monks set these altars in the forest to fight the evil spirits) had commented that the spirits of the dead call people to this place to kill themselves.

(5) It is believed that only they will die who the spirits of Aokigahara want to die. There are many people who do not succeed to commit suicide even after doing everything needful. Hideo Watanabe, one of the shop owners near the forest entrance had once found a woman who had hung herself from the tree. The rope was tight around her neck with her eyes popping out, but still she did not die. 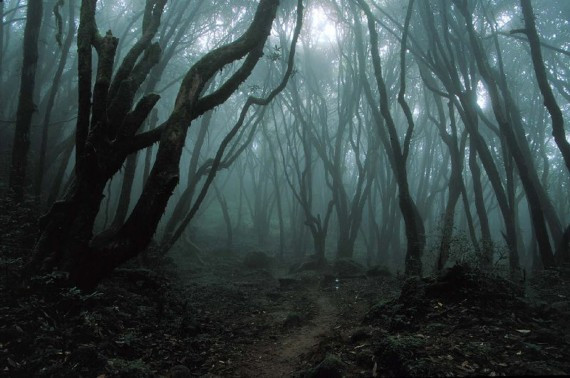 (6) A couple roaming around inside the forest as tourists had encountered a strange claustrophobic feeling. When they tried to get out of the forest, it seemed to them that the trees had come alive and were trying to envelop them. Finally the coupe could make it out with the help of the tape that they had left behind them. 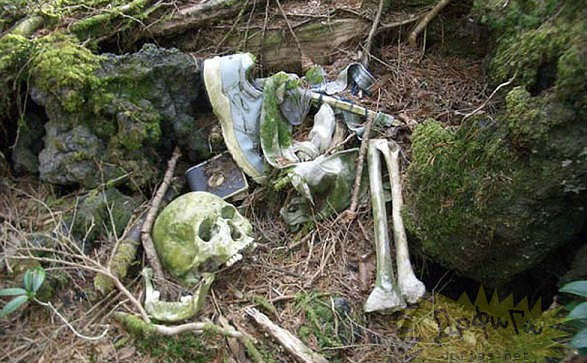 (7) A green skull was found by a hiker inside the forest. While finding skeletal bones or skulls is not very uncommon in this mysterious forest, but the green colored skull was surely very mysterious, much like the forest where it was found. 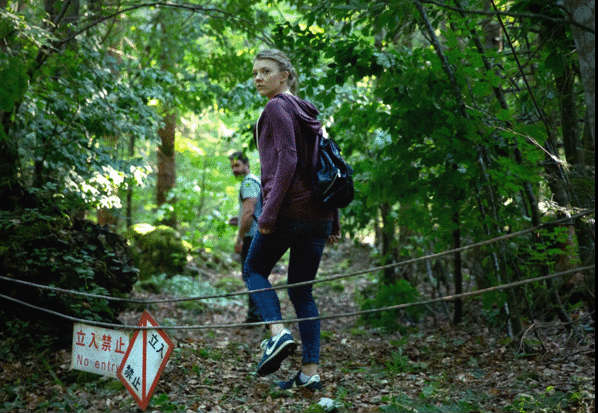 (8) An American couple had encountered a Buddhist monk who had shown them the direction to be out of the jungle while they were freaked out and could not find their way out. When they returned to the locals, they learned that there was a rumor about a Buddhist monk who lives inside the forest and stops people from committing suicide. No one had ever seen this monk outside the forest though. Locals believe that monk is a saintly spirit that stops people from taking their lives. 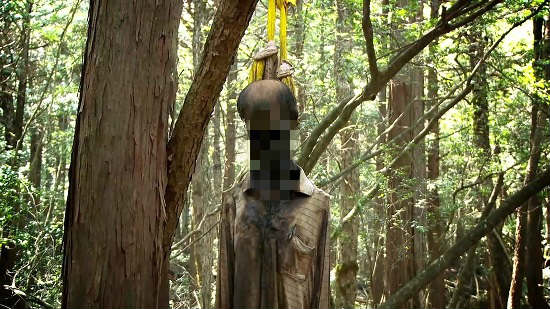 (9) The most common stories of death inside the forest are caused by hanging or drug overdose. What remains a mystery is that why would someone take the pain to go inside the forest to commit suicide when they can do that in the closed privacy of their rooms. 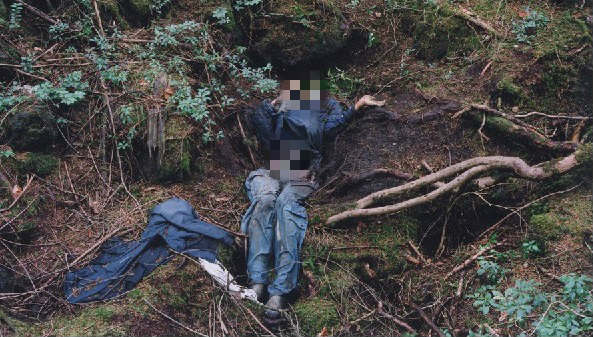 (10) The bodies which are recovered by the suicide prevention patrol squad every year are kept inside a forest station, and someone sleeps next to the dead bodies. It is believed by the Japanese that if left alone, the spirits of the owner of the bodies would scream the whole night.